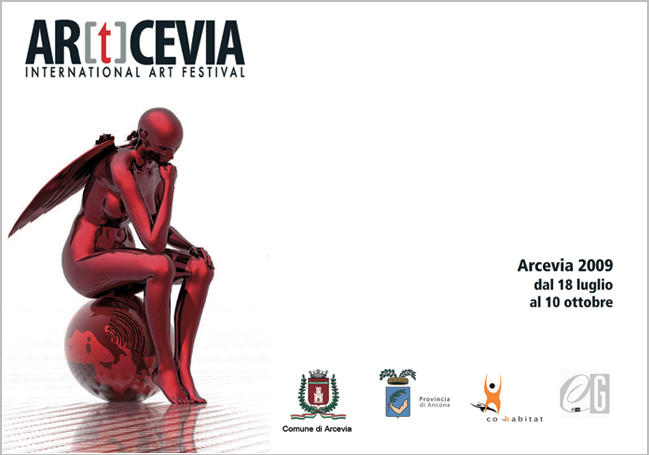 Saturday, July 18, 2009 in Arcevia (AN) opens the second edition of the AR (t) CEVIA International Art Festival, even richer than the previous one with the difficult task of overcoming itself, considered without fear of denials, if not the longest, definitely one of the longest art events in Italy.

Thanks to the Province of Ancona, to the Cohabitat project and to the Municipality of Arcevia, it opens its doors, always curated by CGROUP, after a prologue on 12th July with two interesting exhibitions, the second edition of the Festival of contemporary art strongly wanted and dreamed from CGROUP, loosely based on what was the utopian project of the 70s of the “existential community of artists”.

During the “white night of Arcevia” four important initiatives will be set up:
the first, perhaps the most anticipated, the solo exhibition of the Roman artist Roberto Perini: “Spare parts” twelve great works to the Cuban life, here united and exhibited for the first time.
At the same time always open at 19 hours the personal exhibition of Pietro Morbidelli.
At about 10 pm in the Magazzini of Palazzo Pianetti in Via Ramazzini, the international exhibition of Mailart will be held, where about 600 works from all over the world will be exhibited. The mailart exhibition is the one that most represents the philosophy of CGROUP: free art, art that talks and that is still able to amaze us. A pure art without a market, without constraints, open to all, where there are no investments to make, but only the need to communicate.
Finally, at 24.00, the second part of the mosaic of the artist Salentino Orodè opens in Piazza Crocioni, a mosaic started in 2008 that represents a work in progress, a kind of wish to continue the festival over the years.

This is just the beginning of a series of events that the city of Arcevia and its villages will host until 10 October, events that will culminate with the opening of the collective of August 28: three days of celebration with theatrical performances, as those of Antonio Rezza and Stefano Lucarelli, performances and theater shorts, an evening where various groups will alternate for 15 minutes each, On 4 September Pasquale Mirra will present “Moderatamente solo” at the Teatro Misa, a concert for vibraphone and toys. Among the many innovations, an evening dedicated to the art cuisine “I sapori dell’arte” in collaboration with the Slow Food Castelli di Jesi Convivium and so on until the end of the festival with the evening of AR (t) RIVEDERCI which will close the series of events.

Arcevia is therefore increasingly at the center of cultural exchanges, which offers its territory to unique artistic experiences, increasingly at the center of cultural interests; a place where artists love to exhibit and work; a place where culture and art are integrated with the landscape and the population in an attempt to go beyond the museum area and the art of living room, to give an ideal continuum to the project of Ico Parisi.
This at least is the intent of the curator Massimo Nicotra and CGROUP